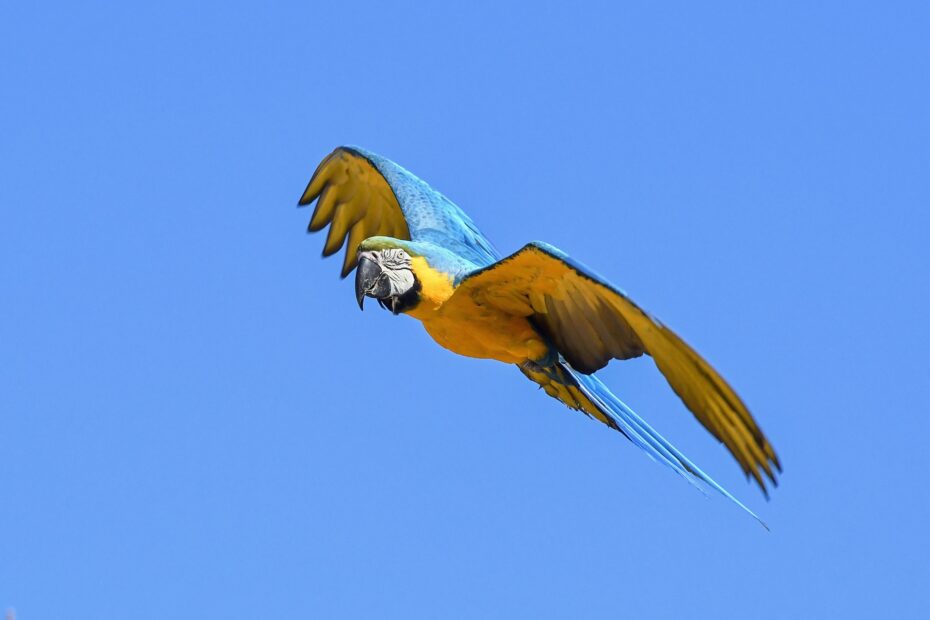 Although not all birds are equally adept at flying, most birds have evolved over time into brilliant flying machines. Flying is the primary mode of movement among birds and is instrumental during feeding, fleeing from possible predators, migrating, breeding, and more.

Parrots are a prime example of these flying birds. Birds from the parrot family might not even come close to winning any avian sprint races, but the birds are highly adapted and built to fly. Let’s share some of the queries avid birders have posed regarding parrots flying.

Truth be told, parrots do not have a very good reputation for flying for long distances. Even so, some are quite fast and agile. Save for the heaviest parrot, the kakapo or owl parrot which can hardly lift off the ground, most of the remaining 350-plus parrot species can fly. Some of the common flying parrot species include cockatoos, parakeets, lovebirds, calques, parrotlets, conures, lories and lorikeets, African greys, amazons, Eclectus, macaws, and more.

But why do parrots fly, you ask? Well, these birds usually develop a knack for flight courtesy of the following;

Do parrots fly a lot?

Parrots fly a lot; they spend their entire day flying from one tree to the other in their territory.

However, they do not fly over very long distances and will barely cover 50 miles in a day. When flying a long way, they will need to make periodic stoppages along the way to find food, rest, sleep and refresh. 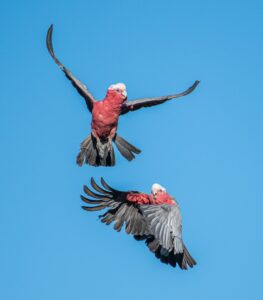 How fast can parrots fly?

How fast a parrot can fly depends on the type of parrot. Some subspecies are more aerodynamic and stronger fliers than others. These parrots are equipped with structural and muscular strength, smooth and streamlined body to reduce air resistance and turbulence and the weight kept to a minimum.

Smaller and lighter subspecies are swifter flyers than their larger and heavier counterparts. The swift parrot is the fasted parrot that can clock a neck-breaking 60mph. Larger parrots like macaws will not quite manage a mere 20mph.

How high can parrots fly?

Parrots are mostly territorial and will fly no higher than 500 feet unless migrating.

The flocks fly quite high during migration, over 10,000 feet above, to avoid obstacles such as wind, trees, hills, and mountains, and avoid dehydration in warmer low altitudes.

Like their cousins in the wild, pet parrots can learn to be superb at flying as early as fledging. But despite being natural flyers outdoors, the limited freedom in captivity can render the flight adaptations of a parrot obsolete. The parrot can lose their ability to fly due to the absence of predators and zero competition for resources in domestication. Therefore, you will need to train the bird to fly as a juvenile and help it master these essential flight skills. Also, allow at least one hour of supervised time out of the cage to allow the bird to fly around freely and stretch its wings.

Other that than heart disease, arthritis and failing eyesight can contribute to a parrots’ failure to fly.

Why does my parrot fly at me?

A parrot gently flying at you is a sign of affection. The birds love human company and love to land on their favorite humans’ shoulders and affectionately cuddle. They are also curious birds. Should they notice anything unusual about you, they may move closer towards you to have a glance.

But if the bird flies at you in an attacking fashion, it could be feeling threatened and acting aggressively in self-defense. Past traumatic events could also trigger habitual aggression within the bird.

How fast does a parrot fly?

Parrots can fly anywhere from 15mph to 30mph depending on their sizes and adaptation. Smaller and lighter parrots fly much faster than larger and heavier ones. 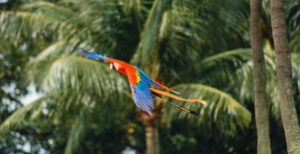 Yes! Like most other parrots, cockatoos do fly, mostly by the day. At night, they return to their homes to roost.

How fast can a macaw fly?

The blue and gold macaws are the swiftest in the family and can manage a staggering 30 mph. The military macaw isn’t far off either with an impressive top speed of 18mph

How far can parrots fly?

Parrots will rarely do more than 20 – 30 miles without needing to stop for food and rest. However, some parrots migrate in search of food and breeding grounds covering over 30,000 miles.