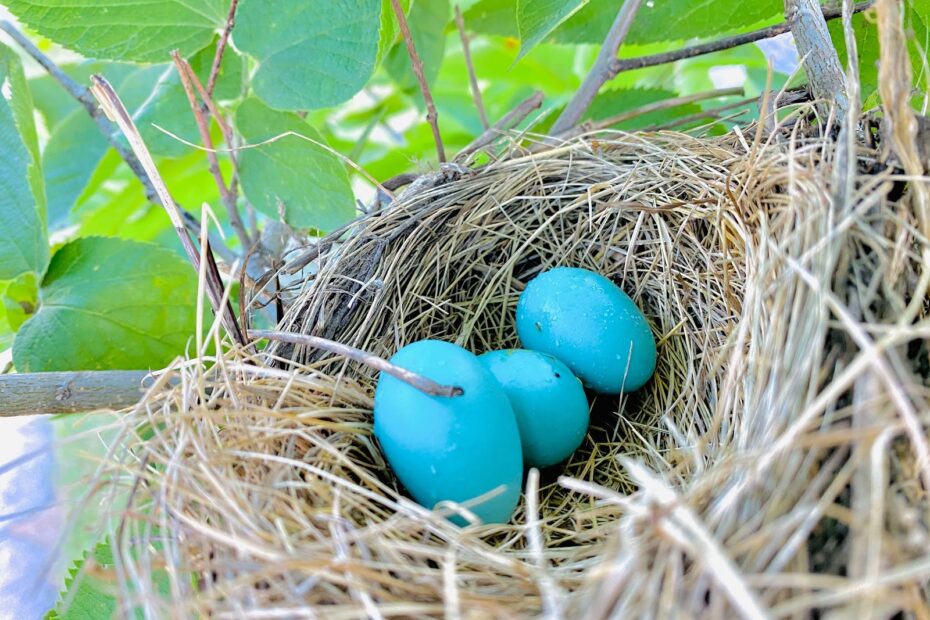 Whether you are a newbie to the birding game or an old hand, you’re probably bemused by the mystery of the Robin Eggs Blue Color as much as we are.

Most cage birds and songbirds that build open-to-the-sky nests lay eggs with camouflaged eggshell colors. The eggs normally have either earth-toned shades of brown color or a light color with black splotches to protect them from predators. However, same cannot be said about the American Robin bird. The American robin stands out as one of only a few avian creatures that are known to lay blue eggs. Not surprisingly, “Robin Egg Blue” is a recognized color in the design world courtesy of this out-of-the-ordinary hue.

To save you the puzzlement of getting too caught up in the biological mystery, here is an in-depth article about the scores of head-scratching aspects about the robin bird. 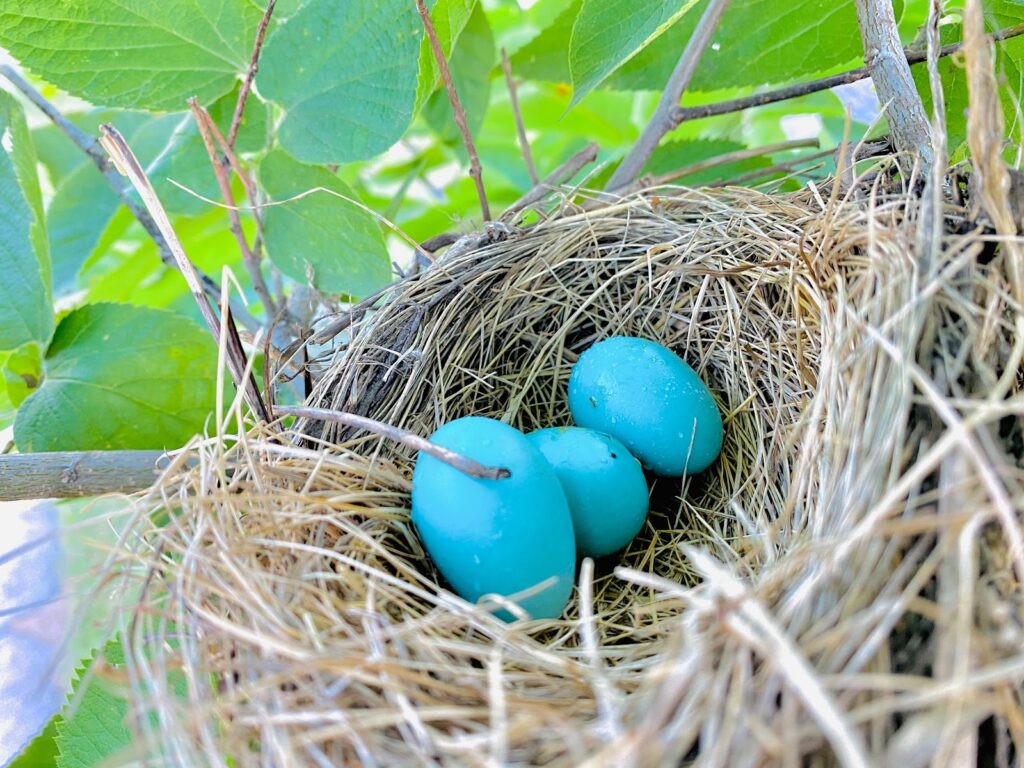 What is a robin bird?

The American Robin (Turdus migratorius) is a gray-brown migratory songbird of the thrush family and Turdus genus. The songbird is distributed across Northern America beginning in Alaska and Canada throughout to the Southern sides of Florida and Mexico. In spite of the similarity in the name, the American robin has many distinguishable differences with the European robin.

In as much as the robins bear an identical shape with the body profile of thrushes, they are the largest among the thrushes bird family in North America. The songbirds have a fairly large body with a round belly, long legs, and a rather long tail. Adult American robins grow to a length of 7.8 – 11 inches and a wingspan of 12 – 16 inches. Most adult robins weigh between 75 and 85 grams.

American robins are usually gray-brown at the back. In the front, and on the breast and underparts, there is a warm reddish-orange stretch (from the neck down to the lower belly). Meanwhile, the head is usually dark in color. More than that, you will notice a white patch on the lower belly through to the lower parts of the tail.

The sexes bear a close resemblance. Nonetheless, you can tell them apart by looking at the head. The female head is visibly paler. Not just that, males are also chubby and have a darker tail, yellow bill, a rusty belly, and noticeable dark streaks on the throat.

The American robin is one of the most populated and common extant birds in North America, spreading from the Southern provinces of Canada through central Mexico to the pacific coast. In the US, they are photo-worthy fascinations in the states of Michigan, Wisconsin, and Connecticut.

These birds do not back away from nesting near human settlements. They are common in open farmland and spaces such as yards, gardens, parks, fields, and golf courses. In the wild, you will find birds in young forests, woodlands, shrublands, and pine forests. The birds flock in trees during fall and winter where they eat berries and roost.

Robins build nests purposely for laying eggs, incubation, and raising the offspring. The adult male is responsible for building the nest. The nest is usually built in dense bushes and elevated not less than 5 feet off the ground. Wild robins use mud to hold together twigs, paper, feathers, grass, and other soft and cushiony materials. Not to forget that the bird constructs a new nest every time it wants to brood. 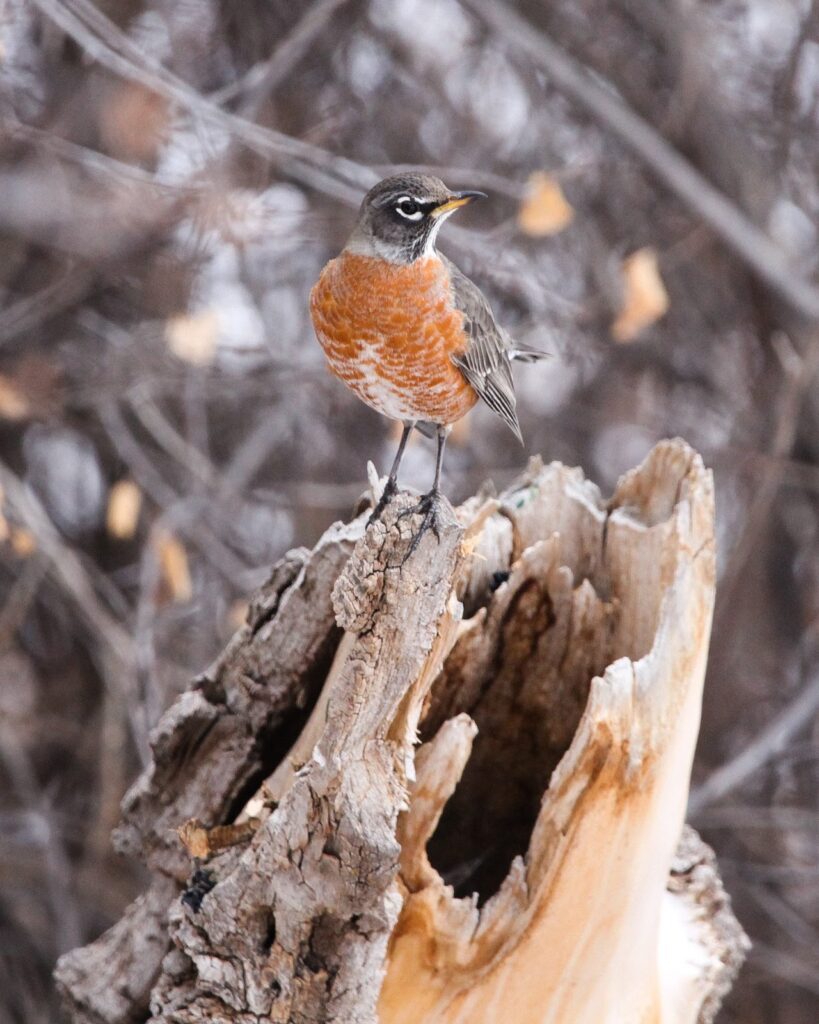 The diet of a wild robin comprises insects such as beetles and grasshoppers, earthworms, and caterpillars. One of the notable adaptations of the birds is the strong legs that are efficient in pulling earthworms, one of their staples, out of the ground. Additionally, in the winter, wild fruits and cultivated fruits like berries are also favorites to the birds.

The birds are most active during day time. During winter, robins come together at night in large flocks to roost in trees. This assembly occurs in hard-to-penetrate spots such as bushy, swampy or thickly forested areas. During the day, the wild robins disperse into smaller flocks which go feeding separately.

In their summer ground, the songbirds protect their territories from intruders and are usually more reserved and anti-social.

How many eggs do robins lay?

The female bird lays a clutch of 3 – 5 eggs, producing one egg every day. Afterward, the female will incubate the eggs for 12 – 14 days without leaving the nest until they hatch. The baby birds will only be strong enough to live the robin nest two weeks after they hatch.

When do robins lay eggs?

Why is the robin egg blue?

The robin bird lays light blue eggs. The eggs are smooth and sport a matte finish. As with most avian eggs, robin eggs are produced with white shells on the onset. At their core, eggshells are primarily calcium, which explains the white color. But as the egg moves through the reproductive tract of the bird, a blue-green pigment called biliverdin is secreted in the uterus. The pigment is introduced in the initial stage of eggshell formation to give it the bird egg color.

Biliverdin is an antioxidant that prevents cellular damage in the body. It is the pigment that makes bruises on human skin to turn blue-green.

A scientific study found out that the color is an adaption that shields the embryo of the bird from the harmful infrared UV radiation from the sun.

How many times in a year does a female robin lay eggs?

Can you eat robin bird eggs?

Robin eggs are not harmful to humans and can be eaten. However, it is difficult to find fresh eggs since they are mostly fertilized.

In the wild, the main threat to juvenile baby birds and eggs are prey birds like hawks, eagles, blue jays, owls, and animals like snakes, cats, and weasels among others.

What month do robins lay eggs?

The breeding season usually begins between April and July, a couple of weeks into the beginning of the summer range until the fall.

How to care for a robin egg?

There is a very slim chance that a human can successfully incubate the eggs and raise the extremely weak hatchlings. You will need to provide the necessary temperature and humidity needed, and frequently tur to prevent the growing embryo from sticking on the shell.

Should the mother robin be unable to incubate the eggs, the eggs will be doomed since the male cannot incubate.

How big are robin eggs?

Do male robins sit on eggs?

How do robin eggs get fertilized?

The eggs are internally fertilized inside the female. The male deposits the reproductive cells to the female robin’s cloaca during intercourse. Subsequently, the male’s cells penetrate to the uterus where it fertilizes the egg.