Everything you need to know about The Blue Quaker Parrot 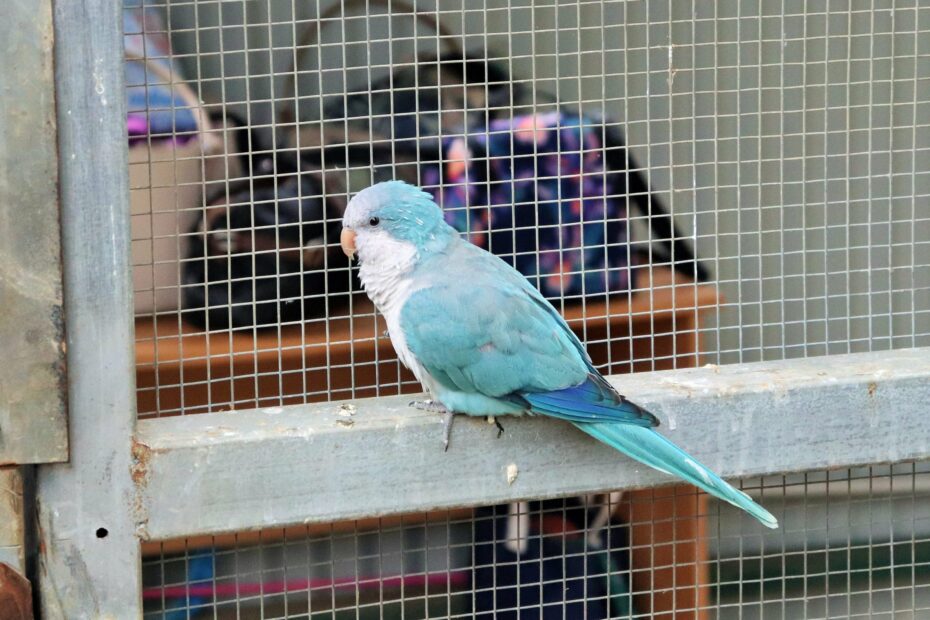 Selective breeding has worked its magic to bring us a new breed of parrots, the blue Quaker parrot. A happy, affectionate, and fun-loving bird that was created to amuse and engage anyone who happens to be on its favorite persons’ list. And so it does. A bird you will love more with every passing day. Moreover, the bird’s personality is so large it outsizes that of birds twice its size. Even more fun than this is that the blue Quaker parrot likes to pull chucklesome stunts and antics, besides being a prolific talker.

So, in this post, we set out to keep you posted on everything you need to know about this sweet little companion bird. May I present to you our findings? 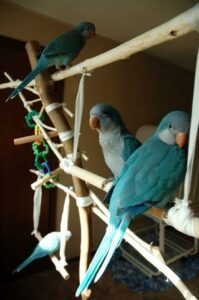 What is a blue Quaker parrot?

Blue Monk parrots are native to the temperate and subtropical parts of South American countries such as Argentina, Bolivia, Brazil, and Paraguay. But if a trip to South America is not in your immediate fixture, you can still spot self-sustaining wild feral colonies of the Quaker parrots that have found their way into the USA from Southern Florida to New York and as far parts of Europe and Asia. They are common in dry or warm open woodland regions, although they can still thrive in urban and cultivated areas and cold climates. 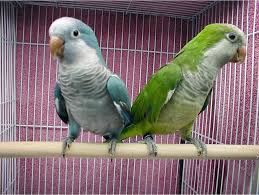 The Blue and Green Quaker Parrots

The blue monk parrot measures around 11-12 inches in length thanks to the long tail feathers. The about 3.5-ounce weight is a little on the low compared to their parent species, the original green Quakers, which weighs a little over 4 ounces.

The feathers on the backs and wings are dark blue, with hints of grey feathers on the breast, forehead, and under the wings. The eyes are black with a white ring around them, while the beak is orange-yellow.

Blue Quakers are monomorphic, and although the female tends to be slightly smaller, the only reliable ways of determining the sexes are by DNA or feather testing.

Very few birds this size can match the large personality the blue Quaker is known for. The birds love to be the center of attention. Furthermore, playful, funny, affectionate, and intelligent are the defining elements of this lovable avian companion. The blue monk parrots find it easy to bond with each other and remain affectionate to their human parents. This personality makes it a good fit for a family pet. Also, the blue parakeet has beauty and brains. In domestication, it can learn a couple of rib-tickling tricks and antics like playing dead, dancing, and hiding items.

We must mention that blue Quakers are very territorial, defensive, and often cage-aggressive. Cases of attacking, biting, and even killing would-be intruders have been reported. So, do not pair them with birds of different species. Should you need to pair it with another Quaker, it is advisable that you separate their cages initially and allow them time to bond. Along with that, they often try to impose themselves on people by biting and may harm children. Therefore, if you are a family person living with toddlers, you may want to think twice before taking the plunge.

That’s not all. The birds are quite noisy with frequent shrill screeching calls and repetitious squawks. Even more, blue Quakers will chatter incessantly while feeding. And although their vocabulary is not as expansive as the green Quaker variety, they can learn to mimic an impressive amount of words and phrases. Worry not should you notice the bird distinctively quaking and shaking. This is completely normal.

Not to forget that the playful bird likes to play with toys and chew on stuff. Playing, chewing, flying around, and perching not only make them happy but also keeps them in shape.

In their natural habitat, Quakers feed seeds, fruits, nuts and berries, vegetables, and insects. The diet of a blue Quaker in captivity should be pellet-based and supplemented with abundant fresh fruits and vegetables. They easily get bored with the same food every day so make sure you rotate. Avoid too much seed as it can cause fatty liver disease and in some cases, make your bird overweight or obese.

Did we mention that they also love chilies?

Healthy blue Quaker parrots ought to have a bright plumage and be happy, active, and playful. Check that the feathers are smooth, the beak and feet are clean, and ensure the eyes are bright and clear. Look out for dull plumage and broken feathers and nails since they may be signs of illness. Inspect the bird frequently and try to identify health issues early when they still treatable. Do not hesitate to contact an avian veterinarian should you notice any signs of illness.

Moreover, blue Quakers are susceptible to fatty liver disease and hypertension should you feed them with fatty foods and a diet high in sodium. Feather plucking is also common in monk parakeets that do not receive enough attention and mental stimulation. And if the feather plucking is not addressed early enough, it may progress into the Quaker Mutilation Syndrome. Another notable illness that is common in Quaker parrots is the Pacheco’s disease. A high infectious viral disease caused by herpes virus. Birds with this infection rarely survive.

The Quaker parrot is a high-energy avian that loves to play and fly in and around its cage.

Besides, monk parakeet love water, bathe them every day in a shallow basin. Alternatively, mist the bird with a spray bottle if it is unwilling to enter the bath. 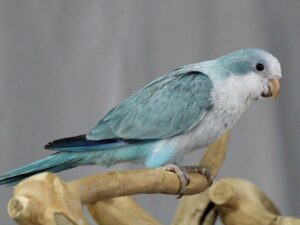 Wild blue Quaker parakeets can stick around for around 15 to 25 years. However, their domesticated counterparts can live as long as 30 years courtesy of proper care and diet and low risk of predation.

Blue Quakers have an adept and almost flawless talking ability and can learn to mimic human speech other household sounds from as early as six months. The birds are sharp and fast learners and will try to mimic every other sound they hear including music and sounds from the television.

How do you train your blue Quaker parrot to talk?

Parrots talk by mimicking and imitating the sounds they hear consistently. If you want to train your blue monk parakeet to talk, you will need to repeat the intended words and phrases over and over again. This repetition increases the chances of remembering and mimicking the sounds. Training blue Quaker parrot to talk entails the following; 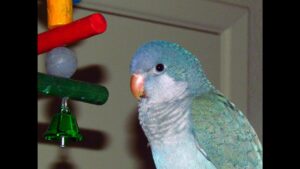 In some states in the United States such as Colorado and California, it is unlawful to own or sell Quaker Parrots due to their threat to agriculture.  Large flocks of wild Quakers can inflict immense damage on crops and fruits. Put simply put, they’re regarded as agricultural pests rather than pets.

Before committing to domesticating one, confirm that Quaker parrots are not outlawed in your locality.

Wild blue Quakers will breed during the rainy season usually between October and December. An adult bird will begin breeding when it is around 2 years old although rare cases have been recorded of sexual maturity at early as 8 months. A clutch will have 4 – 12 eggs. Incubation takes about 24 – 28 days

Quakers can be quite aggressive and unruly during the breeding season due to hormonal changes. Fret not should you notice unpleasant behavior like biting, screaming, feather plucking, and extremely territorial behavior.

Blue monk parakeets can turn very aggressive and bite when you try to handle them. Experts in avian behavior discourage yelling out loud when you are bitten since the bird may interpret it as a response. And because they’re keen on getting attention at all costs, the blue parrot may make biting a habit; a way of getting attention. Needless to say, your kids won’t be very safe with this bird around.

Blue Quakers are voracious chewers and will often destroy valuables such as furniture upholstery when bored or unhappy. The solution is to provide them chewable toys and safe branches to chew on. 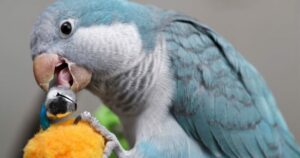 Among Quaker birds, the blue variety is the second most abundant after the original quaker.

The birds are very loud and like letting out repetitious shrill screeching calls and squawks. You will also hear blue Quakers’ chatter every time they feed.

Monk parakeets are usually very affectionate and enjoy being cuddled and scratched by their owners. Avoid cuddling the bird if it is not used to you since it may bite hard.

How much do Quaker parrots cost?

If you have been looking for a price drop in this category, then you should probably keep looking since the price of the blue Quaker is a little steep. A healthy blue Quaker can set you back about $400.