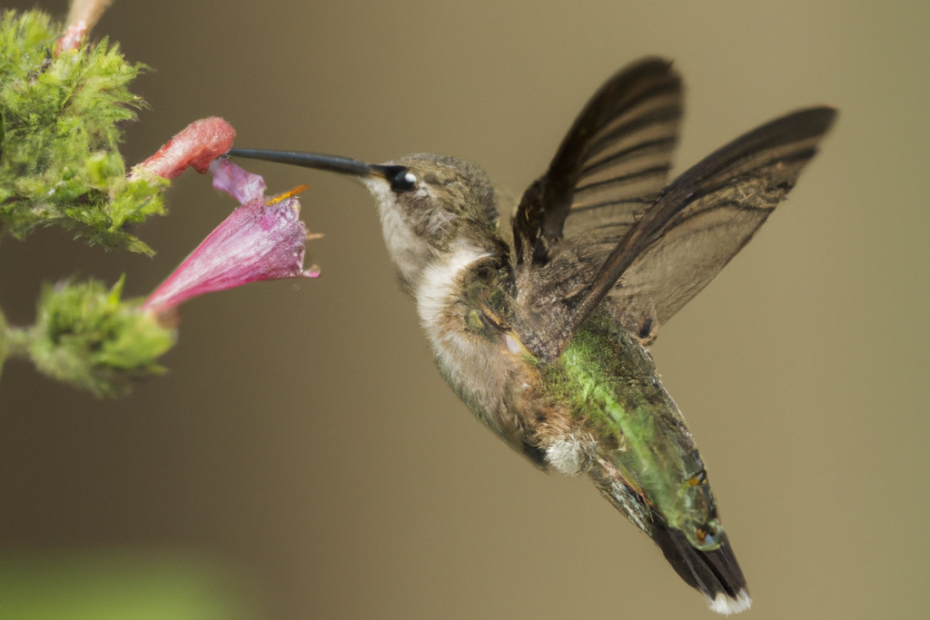 Hummingbirds are some of the most fascinating and beloved birds in the world. With over 360 species, hummingbirds can be found in many different climates and habitats. These tiny creatures are known for their vibrant colors and unique ability to fly backwards. They also possess an impressive metabolism that allows them to fly long distances without rest. But there’s more to female hummingbirds than meets the eye! Let’s take a look at some interesting facts about female hummingbird behavior and habits.

Female hummingbirds have several distinct behaviors that set them apart from their male counterparts. Unlike other birds, female hummingbirds do not typically “pair up” as males do, instead opting to go their own way after mating is complete. Male hummingbirds will move on quickly after mating, while females often stay in one place longer, searching for food sources or nesting sites before they continue on with their journey.

Female hummingbirds also have very specific nesting habits which can vary depending on the species and location in which they live. Generally speaking, however, female hummingbirds will build nests alone or with the help of other females; these nests are typically cup-shaped structures made out of grasses or spider webs lined with feathers or fur for insulation purposes! In addition, mothers may lay up to three eggs per nest but can lay two clutches per season if conditions allow it—a remarkable feat considering how small these birds really are!

Female hummingbirds are incredible creatures with a variety of fascinating characteristics. Physically, female hummingbirds are usually slightly larger than males and have white throats or bellies and green feathers on their backs. They also build nests before mating and lay eggs that are the size of a pea – the smallest bird egg in the world!

When it comes to behavior, female hummingbirds choose their mate based on attractiveness and can be quite aggressive towards other females or birds. Additionally, they do all the work when it comes to keeping eggs warm and raising offspring. This includes feeding young birds until they’re ready to fledge from the nest.

In conclusion, female hummingbirds possess some truly remarkable qualities that make them stand out amongst other avian species. With their small size yet powerful wings allowing them to hover in flight and impressive nesting instincts, these birds are truly remarkable!

One of the most interesting courtship behaviors of female hummingbirds is their aggressive behavior around nesting areas. When females decide to nest, they become very territorial and will show aggression towards other females and potential mates. This aggression can be seen in the form of territorial chases and dive-bombing tactics.

In addition to their aggressive behavior during mating season, female hummingbirds also have unique vocalizations that they use to attract potential mates. Female hummingbirds often produce a loud, high-pitched whistle at the start of the breeding season which is used to attract males from far away distances.

The coloration of the feather patterns on female hummingbirds also plays an important role in their courtship ritual as these colors help males identify them from a distance when looking for potential mates. Female hummingbird feathers typically come in shades of green, red, blue, yellow, or purple and can help them stand out from other species when seeking potential partners for mating purposes.

Female hummingbird’s fascinating courtship behavior makes them one of nature’s most captivating creatures!

Female hummingbirds are fascinating creatures and have many unique behaviors and nesting habits. Female hummingbirds are the only ones who build nests, and they generally take less than a week to do so. They use strands of spider web as a base for the nest, which they construct with materials such as moss and twigs. Females also do all of the work associated with keeping eggs warm and raising their young.

In terms of their behavior, female hummingbirds establish territories that males must court before mating can occur. Males will try to attract potential mates by flying and diving around them, showing off their red-throat plumage. Females are not afraid to defend their nests against larger creatures if needed. To find hidden Ruby-throated or Rufous Hummingbird nests, you can watch where females fly when leaving your feeder during nesting season.

Female hummingbirds lack the flashy throat patch of males but are usually bigger in size than their male counterparts at three to 3 ½ inches in length. They also have white-tipped outer tail feathers that appear rust-colored close up. Male hummingbirds do not help raise young but may find another mate after chicks hatch from eggs laid by females. Thanks to their good memories, hummers remember where good feeding spots are located for future visits!

Female Hummingbirds are fascinating creatures, with their long beaks and fast-moving wings. On average, female hummingbirds lay only two eggs per nesting period. They have evolved unique characteristics such as ruby-throats that are three to 3½ inches long and they are slightly larger than the males. Female hummingbirds feed on the nectar of flowers, small insects, and spider webs for protein, carbohydrates, fats, vitamins, and minerals to fuel their high metabolisms and hovering flight patterns. Females usually consume up to 50% of their weight in sugar (nectar solution) each day. Female hummingbirds also try to survive cold winters by eating insects and spiders they capture in the air. These amazing birds can pluck spiders right out of their webs without missing a beat! Fascinating facts about female hummingbirds show us how incredible these creatures really are!

Female hummingbirds are an amazing species with unique behaviors and migration patterns. During spring migration, some female hummingbirds take the more leisurely route along the coast to Mexico, while most Ruby-throated Hummingbirds make the direct flight across the Gulf of Mexico. Females build their nests before mating, a process that takes less than a week and generally use strands of spider silk for building material.

Female hummingbirds are just as territorial as males when it comes to protecting their nests and offspring–it’s not uncommon for them to chase away other birds or even larger animals that come too close. After mating, they feed their young by regurgitating tiny insects mixed with nectar. The age of first flight varies by species; Broad-tailed Hummingbirds have been known to leave the nest after only three weeks!

Interestingly enough, male and female hummingbirds look different from each other–male Black-chinned Hummingbirds have red throat plumage while females are slightly larger with green throats. Males establish a territory in order to court females who enter it with flying and diving behaviors. Female-plumaged Broad-tailed, Rufous/Allen’s, and Calliope hummingbirds often stray east of their usual migration route during spring migration season as well!

Female hummingbirds are fascinating creatures, displaying a variety of behaviors that make them unique. Unlike their male counterparts, female hummingbirds are not as aggressive and instead display more social behaviors. They compete for food sources such as nectar and tiny insects, but also feed their young by sticking their bills deep into the young birds’ mouths to regurgitate food. Female hummingbirds also tend to be the primary caregivers for the fledglings until they reach around three weeks of age when they are ready for their first flight. This behavior demonstrates the strong bond between mother and child which is an endearing trait among this species of bird. As a result, female hummingbirds have become an important part of our environment and culture due to their unique behaviors and ability to care for their young.

Is there a difference between male and female hummingbirds?

Hummingbird species are known for their long, pointed beaks. But do they have different-sized beaks based on gender?

The answer is yes. Male hummingbirds have longer beaks than females of the same species. The length of the beak can vary from 1/3 to 2/3 of the bird’s body length.

I have a question about the territoriality of female hummingbirds. I know that male hummingbirds are territorial and will chase away other males from their territory, but is it the same for females? If so, what happens if two or more females share a territory? Do they fight each other over it? Or do they just avoid each other like they would any other bird?

A female hummer will defend her territory against intruders, but she does not usually attack another female. She may chase off other birds or large mammals, but she rarely attacks another hummingbird.

What is the best way to attract a female hummingbird?

How should I approach a female hummingbird? Is it better to sit still and wait for her to land near me, or should I move slowly toward her?

It depends on where you are. A female hummingbird will fly up to 30 feet high and then hover above you before landing. You might want to stand very still and let her get closer to you. Once she lands, she will perch on your finger or arm for several seconds before taking off again. It takes a lot of patience to watch a female hummingbird land.