There are better pet birds out there, but we are certain you can’t do much better than the Jenday conure if you have a thing for beautiful, bright pops of color. The colorful conure sports powerful splashes of hue that demand attention. A brightly colored plumage that is so elegant it begs to be seen and will make a statement in any setup.

Even better than that is that the bird’s personality is just as charming and bold as the colorful looks. You will love it more with every passing day for its sociable, cheerful, playful, and lovable character. A great companion to interact and play with, and help you clear your tired brain after a long day at work. 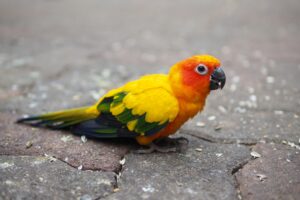 The road toward keeping this small parrot, however, isn’t paved in gold and can be very testing. And an overwhelming amount of unreliable and misleading writings pop up every time you search for info on the jenday conure. But have no fear, friends! We took time to put down this well-founded and comprehensive post, and enlighten you on all matters of the jenday conure. Let have a look.

What is a Jenday Conure bird?

The jenday conure (Aratinga Jandaya) is a small and colorful parrot bird of the parrot family and Aratinga conure genus. The species hardly thrive in wild habitats and is usually kept as a pet bird courtesy of its interactive, playful, and gutsy personality. It bears a close resemblance to the Sun Parakeet and also goes by the names jandaya parakeet, yellow-headed conure, or flaming parakeet. Ahead, you will find the main attributes of the bird. 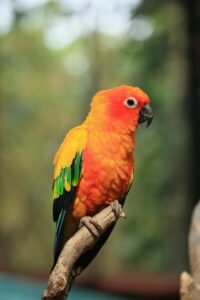 The jenday is a petit oiseau with a long tail, short legs, and a short, sturdy, and hooked bill. The birds can grow to a head-to-tail length of about 30 cm or 12 inches, and weigh 125 to 140 grams or about 5 Oz. Besides DNA testing, the only way to tell apart the sexes is that females are slightly heavier than males.

What a beauty this bird is! The multi-colored avian would sit pretty at the helm of the most beautiful birds’ hall of fame.

The orange-gold body blends elegantly with the golden-yellow head. Also, the tail has feathers that are emerald green at the base and then turn blue during flight. And you can’t help but notice orange patches of varying brightness around the eyes. Along with that, the legs and feet are grey while the beak is black.

The jandaya parakeet can trace their roots to the forests of Northeastern Brazil. Despite being infrequent in the wild, the neotropical South American parrot can be found in lowland areas with deciduous woodland, along edges of rainforests, and in dense bushes and forest clearings. They move around in flocks of 15 – 30 birds and enjoy flying up high amidst the canopy. Even more, the birds usually nest inside tree hollows very high off the ground.

The word “jenday” is derived from an indigenous language in Brazil called Old Tupi. The name means ‘small parrot’. The first recorded account of the Jandaya parakeet was by Johann Gmelin in 1788. Later on, jendays impressed the devoted bird lovers. And although they were illegal to export at the time, people began exporting them from their natural habitats to other parts of the world.

Many people accent to approaching this bird with skepticism only to be taken by surprise after finding out just how intelligent, playful, and highly social they are.

As far as interacting well and loving their favorite humans go, the cuddly birds passed our tests with flying colors. Through hand-feeding, the small parrot can develop emotional bonds with their human humans. Once they have identified their owners, the yellow-headed conure can get so protective it will attack anyone who dares messes with their human friend. Jendays like to demand that you cuddle and pay attention to them. Should the bird feel neglected or lonely, it can resort to screaming.

Is that all that the jandaya parakeet has to show? Certainly not! It just keeps getting more and more interesting!

What’s more, the curiosity of the little feathered pet is unmatched in the avian world. It will want to sneak a peek and find out whatever you’re doing. The bird also adores treats and will want to taste everything you put on your plate. In their wild flocks, the jendays usually calls out to and communicates with each other by letting out a loud shrill scream. 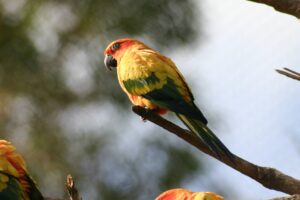 In the wild, these conures primarily feed on seeds, fruit, nuts, and the occasional insect. But if you intend to keep it in your home, you will need to offer a balanced diet.  Feed the bird with an unlimited supply of pelleted food. Furthermore, giving them fresh chopped fruits and vegetables like apples, melons, berries, kales, and carrots will also keep the bird healthy and help you manage common diseases. It is also advisable to offer birdseed as a treat.

For all the years upon years of a bird’s life, it does nothing all day but eats and breeds. So, make sure food and water are available at all times. The possibility of your bird turning obese should be the least of your worries since the bird is extremely active. Besides that, change the water every day and routinely clean the feeding and water bowls. DO NOT give the bird harmful foods like avocado, chocolate, or caffeine. 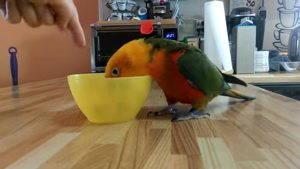 If loud piercing bird sound annoys you, then the jenday conure may not be for you. The bird is known for loud shriek noises that can be deafening and infuriating to the people around. In their natural habitats, the scream is a call out to others in their flocks. But in captivity, it is infuriating making the bird an unwise choice for those of us who live in small apartments.

But just when you thought that things couldn’t get any better, comes its minor talking ability. Although the birds’ oratory skills aren’t quite up-to-snuff as with other talking parrots, the jandaya parakeet is capable of learning to mimic up to a dozen words and phrases. Even so, they will hardly talk.

In captivity, a flaming parakeet will live for around 25 to 30 years. Meanwhile, away from civilization, it can stick around for about 10-15 years due to predation, disease, and environmental factors.

How healthy are Jenday Conures?

A healthy jandaya parakeet ought to be bright, alert, and active.   Confirm that the feathers are bright, smooth, and lay flat, and the scales on the feet are flat. Check if the feathers around the excretory opening are clean, dry, and free of smeared droppings. The nails and beak should be in good condition, smooth and well-shaped while nostrils need to be clear and clean. Other signs of illnesses you should look out for are loss of appetite, lethargy, and difficulty in breathing.

Below are some of the common illnesses and conditions that a jenday is susceptible to; 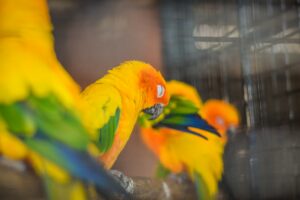 How to Care for my Jenday Conure?

Here are the different ways of providing utmost care to your pretty little feathered pal. 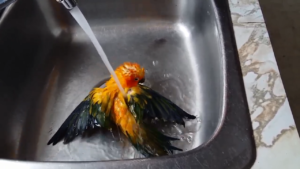 The female lays 2-4 white eggs per clutch and incubates for around 26 days. Jendays can breed all year round. Do not breed during months with very high or low temperatures since the juveniles find it hard to survive in extreme conditions.

How much does a Jenday Conure Cost?

Jendays retail at about $400 – 600. They may not be the cheapest out there, but they are still within reach considering some high-end pets come more priced than a new small car.

In spite of the drawback of the piercing screams this bird lets out, the jenday is as yet a firm favorite for many pet lovers. If you can put up with the noise, then they are social, entertaining, and lovable family companions more so when raised as hand-fed juveniles.

Check if the regulations in the area you reside permit people to keep the birds. For example, some states in the United States, like New Jersey have termed it illegal to keep one.

Conures can mimic a few words although they are not prolific speakers like other talking parrots.

Jendays are so affectionate once they get used to and bond with their owner. They love to be cuddled and be given attention. They love riding on human shoulders or inside their shirts.

From time to time, jendays will produce loud piercing screeches that are hard to tolerate. Thankfully, the more attention a Jenday receives, the less likely it is to scream. So provided that you give the bird the attention, care, and company it desires, chances of screaming are slim to none.