Macaw: A Bird with a Winning Personality

The brilliant colors of macaw birds would be charming enough, but these prized pet birds have also got lovable personalities that sparkle even more. Beautiful birds both inside and out, macaws deserve to enter into a beauty pageant or two. It’s no wonder they are one of the world’s favorite pets. They are sociable, loving, intelligent, and fun to be around.
Ahead, we got you covered with everything you need to be familiar with as far as the macaw bird goes. 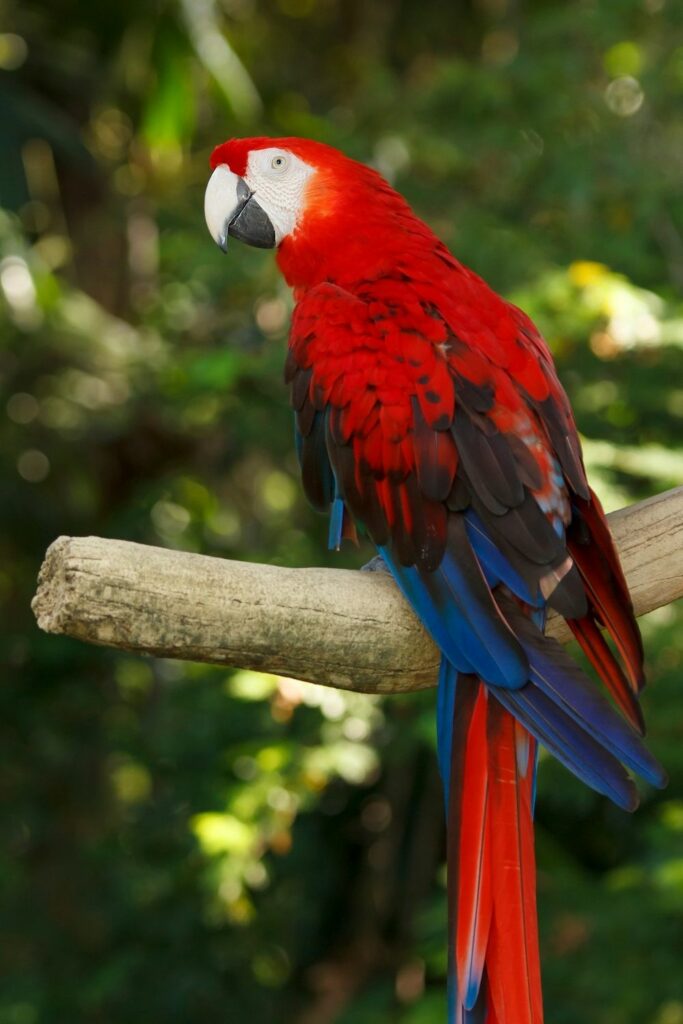 What is a macaw bird?

Macaws(Ara macau) are a broad order of more than 18 species from the parrot family Psittacidae. They are endemic to the Southern parts of North America and Central America, the Caribbean, and South America. They dwell in rainforests and wooded grasslands. They gather in flocks of 10 to 30 and fly for long distances to search for food.
Most macaws have vibrant colored feathers an adaptation that helps the birds blend into the green canopies with colorful fruits and flowers.
Macaws are categorized into large macaws and mini macaws. Large macaws include the hyacinth, scarlet, military, green-winged macaw, blue-throated, red-fronted, Buffon’s, Lear’s, and Spix’s macaw. Examples of mini macaws are the Hahn’s macaw, yellow collared, severe, and illegars macaw.
Not just that, through selective breeding, psittaculturists have come up with hybrid species of macaws like Catalina, harlequin, and the Camelot macaw.
That is not all. Beautiful, intelligent, and vivacious, macaws also make excellent companion birds. Despite being social, entertaining, and easy to tame, they also have rather long lifespans making them one of the firm favorites in the pet trade.

Different macaw bird species have their own unique brilliant multi colorations and patterns ranging from green, red, yellow, blue, and gold plumages.
Macaws are the largest among parrots with a head-to-tail tip length of 12–40 inches thanks to their long tails. The longest is the hyacinth macaw, with a length of around 40 inches. Smaller mini macaws like the Huhns macaw can only grow to lengths of about 12 inches.
The beaks large, curved, powerful, and adapted to cracking open hard nuts and seeds. The strong beak will also be used occasionalély as a third foot during climbing trees to find food.
Even more, the tongues are dry and have a bone inside them, highly effective in tapping into fruits.
They have long tail feathers and gripping toes that are designed to clutch on to branches and catch hold of items. You cannot help but notice the prominent being the bare patch of skin around their eyes in some species, and identifying trait used by most people. In some macaws, the patch can change color when the bird’s mood change.
The male and female macaws have little to distinguish them. 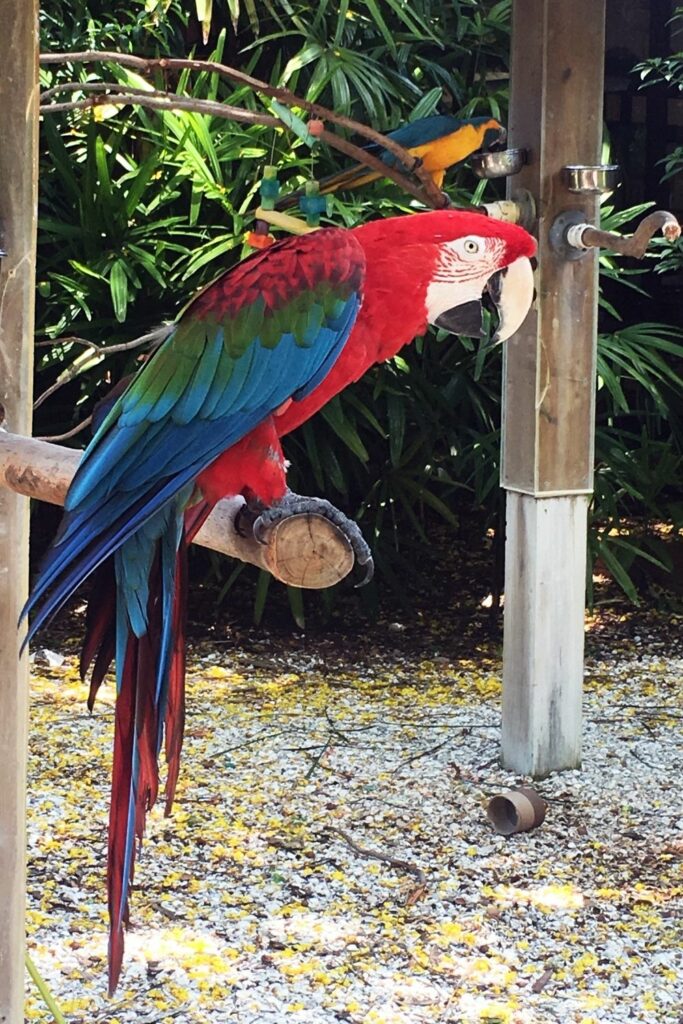 Macaw Bird inside his cage

Wild macaws will consume native seeds, fruits, flowers, green leaves, palm nuts, figs, and sometimes, nectar. Aviculturists have also observed that undomesticated in some regions eat clay from exposed river banks, meant to neutralize toxins present in some of the food the bird feeds on.
As aforementioned, their large sickle-shaped beaks are efficient in crack opening hard-shelled seeds and nuts. Along with that, their long muscular tongues will easily dislodge the fruits and nutmeat.
Macaws in captivity need a daily serving of pellet mix supplemented by chopped fruits and vegetables. You will also need to provide clean water free from chlorine and hard metals.
Do not expose your bird to chocolate, cherries, garlic, avocado, and caffeine. They are poisonous to most avians.

Macaw feeding from the owners hands

A macaw may not be a wise option for a pet bird if you are sensitive to loud noise, reside in an apartment, or has nearby neighbors since they are quite noisy. They will regularly let out loud and ear-piercing squawks, screams, and screeches. The screaming tends to be louder if the bird feels lonely.
Also, you can teach your bird to talk. They love to mimic and reproduce common sounds and noises.

You can spot these parrot species flying to and from roosting and feeding spots especially the more common scarlet macaws. In-flight, you will hear their slow distinctive wingbeats as well as loud screeches and calls they like to emit.
Also, macaws can identify each other and often communicate within the flock by vocalization. They also mark territory. Listen for echoes of loud calls, squawks, screeches, and screams from forest canopies.
They like to gather and feed in flocks that are usually pair or family groups. Wild species nest inside hollow and cavities in trees and sometimes in riverbank holes.
Domesticated macaws are charming and lovable companions. They love to be the center of attention and can learn to perform tricks and clownish antics. The playful bird will roll on their backs. You need to offer sufficient socialization to the bird lest it feels lonely and stressed. Lonely birds often develop unpleasant and harmful behavior like feather plucking.

In addition, they will chew on anything within their reach. Get them chewing toys to exercise their strong beaks. What’s more, they are excellent talkers and can talk all day long.
The bird may sometimes turn aggressive and attack a person by lunging especially a stranger. Another common behavior is regurgitation. It may return food it has swallowed and offer it to its favorite mate, whether human or fellow bird.

The most prone health complications to look out for are feather plucking, proventricular dilatation disease (PDD), psittacine beak and feather disease (PBFD), beak malocclusion, psittacosis, and aspergillosis.
Reach out to a qualified avian veterinarian as soon as you notice any signs of illness such as dull and laid back nature, runny discharge, persistent sneezing, and loss of appetite. More than that, ensure you regularly clean the bird’s confinement, and the feeding bowls.

A pair of Macaws Sitting on a tree

One aspect that attracts pet bird lovers to this bird is their lifespan. A macaw in captivity will stick around for up to 80 years. Smaller birds, however, have shorter lifespans.

Is a macaw a good pet?

Although not all species of macaws make good pets, those that can be domesticated make loyal and loving companions.
These macaws are friendly, affectionate, intelligent, fun, and easy to tame. Examples of companion macaws include blue-and-gold, hyacinth, scarlet, green-winged, Hahn’s, military, and severe macaws.

How much does a macaw cost?

The cost of a macaw is determined by the size with larger subspecies like scarlet macaws costing 1000 – 2500 and smaller macaws setting you back 600 – 1000. Hybrid macaws can be a little on the expensive side costing upwards of 2000.

How bad is a Macaw bite?

This parrot species can be a little territorial and may use their strong and powerful beaks to strike or spook at people, especially if you’re not very familiar or close to the bird. These acts of aggression should be discouraged.

Can you own a macaw in Australia?

It is within the law to own a macaw in Australia. As with other countries like the US, they are among the most popular pet birds in this part of the world.

Is a macaw a parrot?

Yes. Macaws belong to the parrot birds species. The sport similar characteristics such as four-legged feet, short and hooked bill, and flexible tongue.

Sadly, according to the IUCN Red List, many macaw species have become endangered or at risk of extinction.

Macaws are omnivorous bird and love to eat seeds, fruits, leaves, insects and spiders among others.