The Hidden Mystery Behind Roc Bird 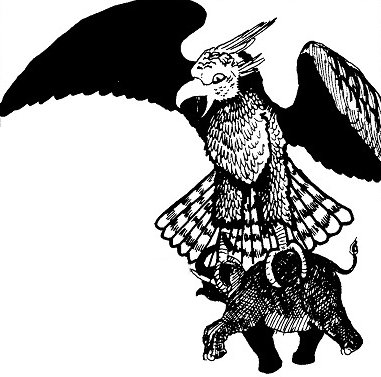 How big can a bird be, you ask? Well, the roc or rukh bird is mind-boggling mythology from the middle east about a terrifyingly huge extinct bird. Not quite a bird by normal standards, rumors have it that the gigantic avian creature was so strong and powerful it could carry full grown elephants into the air.

Whether the origin of the story is factual or completely fictional is a matter of debate. All the same, here is a detailed post to put you in the picture in matters of the roc mystery, and perhaps, scratch your itch to understand the genesis of this phenomenon. 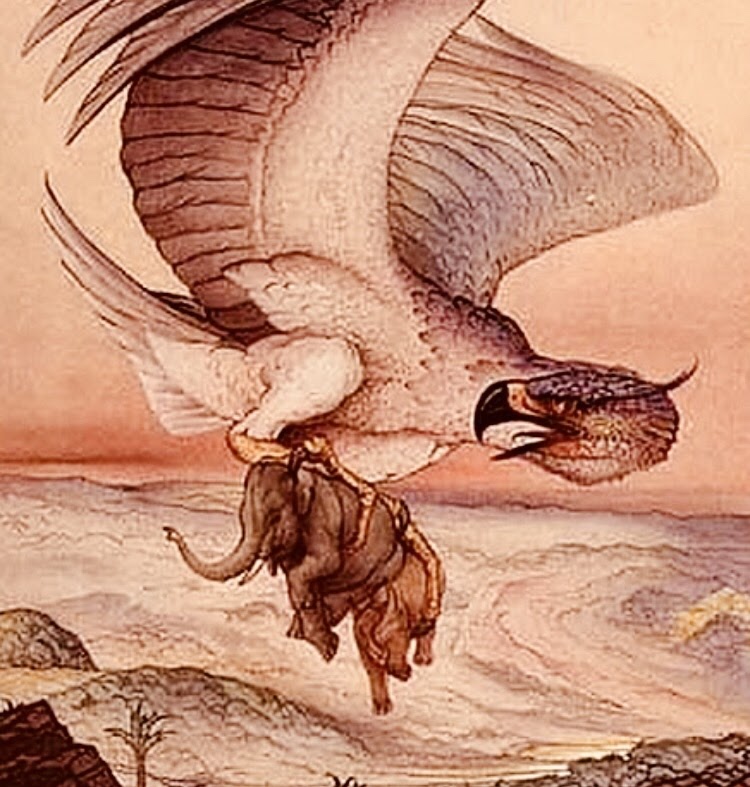 What is a roc bird?

Haven’t heard of the mystery of the roc? By the outrageous number of queries and discussions out there about the roc mythology, you’d be in the minority.

The roc or rukh is a giant mythological bird of prey from Arabian and Persian folklore. Otherwise known as rukk in Arabic or rukh in Persian, it was also popularly referred to as the mountain bird or elephant bird. The huge mountain avian is believed to have existed between 1200 and 15oo AD.

You’ll get a different story every time you inquire from different people how big the roc was.  Usually described as an eagle-like bird, most mythologists speculate that the roc was about a staggering 20 feet tall with a wingspan of about 48 feet. As if the enormous size wasn’t frightening enough, the eggs were freakishly big with a 150-foot circumference.

Many who claim to be fortunate to catch a glimpse of the roc often paint a picture of enormous eagle-like creatures. Very much like an eagle, the roc wore a dark brown plumage. The bill was relatively short, sharp, and curved whereas the tongue was long and forked. Some reports indicate that the creature was equipped with sharp pointed teeth along the lining of the beak. Even more, the storytellers compare palm leaves, the roc.

As with anything in life that is the slightest bit mythical, there are several schools of thought when it comes to the origin of roc birds. Below are some of the theories that justify and support the mystery and try to answer the timeless questions regarding the origin of the roc.

i. Sinbad and the Sailor and Abd al Rahman Story

In the short story collection, One Thousand and One Nights, two of the storytellers narrate an encounter between sailors and the roc. One story describes the roc carrying Sinbad to safety. Sinbad the Sailor describes a bird of stupefying size carrying him to safety without even noticing after his ship is wrecked in the middle of the sea. He tells of the roc flying so high he could hardly see the earth. Sinbad the Sailor recounts unhanding into the roc’s nest on top of a mountain.

Even crazier than the size of the roc is that its eggs were about a hundred and fifty times bigger than a hen’s egg. Later on, Sinbad lashed himself onto the legs of the roc using his turban and escaped the nest. The roc carried him unknowingly and Sinbad only let go of the giant bird when it flew over another safer island.

Abd al Rahman, a sailor from North Africa also talks about finding huge roc eggs in a dome on an island he landed with his ship. Abd al Rahman and hiss fellow travelers broke the eggs and ate the hatchlings inside only for the mother roc to appear. Fortunately, they escaped although the hair color of some of the men in the crew who had feasted on the eggs changed.

Even more, the well known explorer Marco Polo adds another layer of justification to the myth. In one of his circumglobal voyages en route to China in the 13th century, Marco Polo records seeing a gigantic eagle-like creature living around Madagascar. Marco Polo recounts the enormous bird swooping down, seizing full grown elephants using its talons and lifting it to high altitudes. It would then release the poor helpless animal to drop to the ground before diving headfast to feed on the squashed mammal.

The Ethiopian holy book, The Kebra Nagast, also mentions the rukh. According to the book, the roc delivered the blessed piece of wood to the Biblical King Solomon. The king then used the piece of wood in the construction of the great Solomon’s temple. Courtesy of the same piece of wood, the Queen of Sheba’s goat-like feet converted to ordinary human feet.

Afterward, so honored was this piece of wood that they thought it was in order to embellish silver ring decorations onto it. It’s a commonly held belief in the tradition that it was the same silver rings that were paid to Judas Iscariot for betraying Jesus. Along with that, the piece of wood is believed to have been used in building Jesus’ cross.

That is not all. Moroccan explorer Ibn Battuta testifies that he saw a huge giant bird on his way from China in 1340. He describes the rukh as a mountain floating above the China seas. Battuta and the sailing team could not see the sun or moon, lost direction, and ended up in an unfamiliar sea

Critics of the myth are also keen on spoiling the fun and protest that the flightless African ostrich was mistaken for a young one of a presumably much larger species. Others contend that calling the roc a giant is a stretch of the imagination. The alleged encounters with the roc may have lured different communities into magnifying and making a big thing of ordinary large birds such as the moa and Haast’s eagle from New Zealand,

Is Roc a legendary bird?

The roc is a legendary giant bird whose possibility of existence generates more heat than light. It is praised for unconsciously saving the lives of many sailors who had been stranded at sea. Most cultures believed the rukh was a mountain bird. However, nobody knows how the species met its demise.

Nonetheless, present-day scholars dispute that the roc mystery is a magnification of actual large size birds, most of which are no more.

What is a mythical bird?

Just like the tales of fire-breathing dragons and the giant primate, bigfoot, the roc myth is usually an imagination in the minds of the adherents. Although most myths are told as stories for entertainment, some were anchored on the truth. Nonetheless, like the roc myth, the stories have been exaggerated and misinterpreted all thanks to word of mouth transfer among different generations.

How big is a roc?

The roc was simply bigger than life. Mythologists estimate the roc had wingspan of about 48 feet. This mountain of a bird must’ve caused quite a fright. You ought to be kind of glad that you won’t have to face off against the most formidable birds of prey to have ever existed. On top of being unthinkably huge, the eggs are also fittingly hefty and whacking. The roc egg had a circumference of close to 150 feet.

Facts About the roc

Which are the other mythical birds?

There is a wide assortment of theories available in different cultures involving birds with extraordinary strength and powers, and monstrous sizes. Some of the other mythical birds worth mentioning include,

The phoenix or Arabian bird is yet another legendary mysterious bird from old Greek folklore. It is a colorful sacred bird linked to the worship of the sun. Persian, Egyptian, and Chinese traditions among others all relate to the legend of the sacred bird. The mythical bird usually lived in the Western desert. It is believed that it is related to the mythical bird of Egypt, and the fuang wang of china.

Like the roc, this mythical bird also bears a close resemblance to the large eagles both in looks and size. And going by the available images, the Arabian bird sported a red plumage with highlights of gold and yellow.

Moreover, it had a 500-year cyclic lifespan. Once it reached its ripe old age, it would build a nest and sit on it. It would then catch a fire ignited by the sun and combust to ashes. The offspring would then rise from the remaining ashes and replace the predecessor. In most cultures, the it was symbolic of immortality, hope, renewal, and continuation of life. 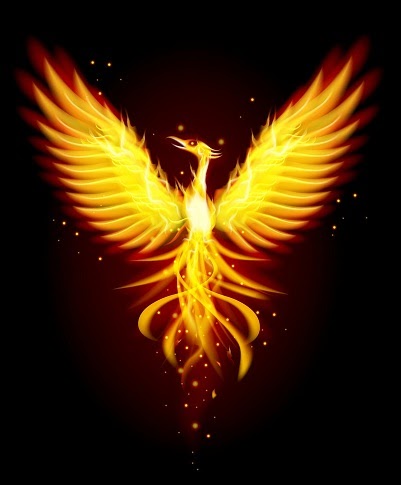 A mythical bird from the North American Indian community associated with thunder and lightning. The roc resided in the Pacific North Western Mountains. The enormous thunderbird was so gigantic it could lift a small whale using its talons. It used to flash lightning from its beak and eyes and beat its wings to roll thunder. Not just that. Also, the roc is praised for causing rainstorms and watering the earth making it possible for food and vegetation to grow.

Apart from North America, there have been numerous cases of similar species across Europe, Asia, and Africa. The creatures are often used as a symbol of power, strength, and protection.

What does the bird of prey eat?

The diet of the bird of prey is said to have been comprised of large mammals such as elephants and domesticated animals. The roc could also prey on human beings.

How heavy is a Roc?

The exact weight of the roc was never documented. However, if the weight of its prey is anything to go by, the bird must have been heavier than an elephant since it was large enough to carry away an elephant. Remember, elephants weigh upwards of 3000 kilograms (6700 lbs.)

Read also about What is the Jian bird? The Myth of the Magnificent Creature