What Everyone Ought to Know About the English Budgie

If creatures with big personalities shall inherit the earth, then someday the English budgie will rule the avian world. At a glance, it is very easy to fall in love with the bird not just for the vibrant colors, but also because of the calm and laid-back budgie personality of these small and stunningly colorful parrots. Along with that, hang around them for a reasonable amount of time to discover their active, attention-seeking, and playful side. A sub-species of the Australian budgerigar, the mildly active and tranquil nature of the bird-inspired animal breeding experts to transfigure it over centuries and bring forth the colorful show-stopping pet bird we know today.

Here is a wealth of knowledge regarding the English budgie, and a brief account of how the bird has managed to transform over time and make it through centuries of diseases, pandemics, calamities, recessions, world wars, and more. 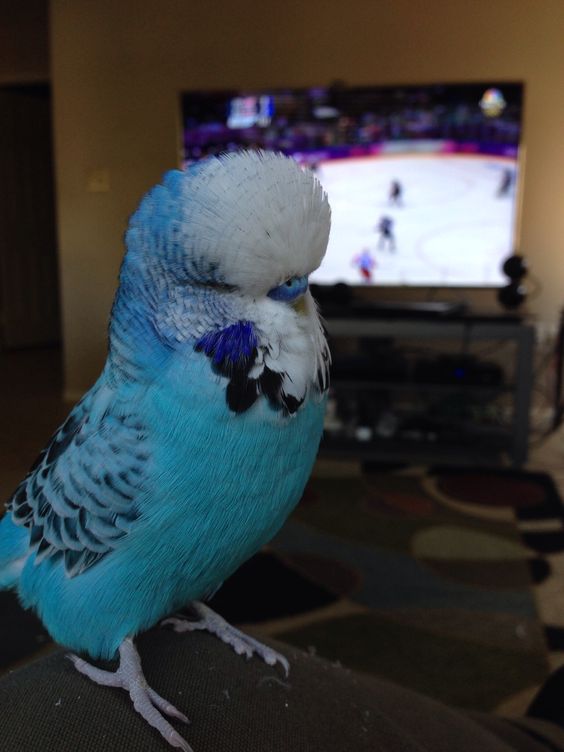 Pogi, my English Budgie watching hockey with me.

What is an English Budgie?

The English budgerigar or Melopsittacus undulatus is a subspecies of the Australian budgie. Through selective breeding in England in the 19th and 20th centuries, experts were able to come up with a larger size and more colorful show bird with more distinctive markings.

In contrast to the original Australian budgie which is yellow and green for the most part, more vibrant colors have been injected into the English Budgie through selective breeding efforts and color mutations. Today, save for cats and dogs, the English budgie could be the most popular pet both in the United States and Europe. 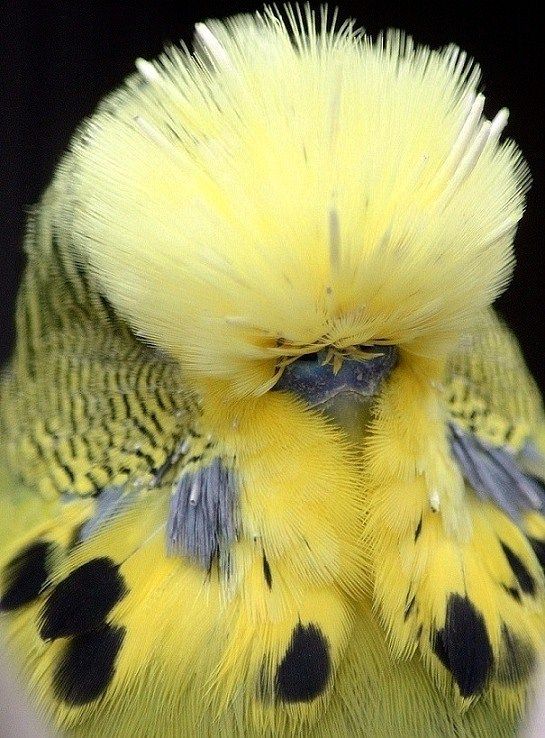 Forget their calm temperament, the English budgie adores being in the limelight and being the center of attention. This trait bodes well for pet owners who love to use them as show birds. It is the curious and intelligent type that will want to learn new tricks, mimic words, and simple routine behaviors such as stepping upon the owner’s hand. If hand trained well, it is difficult to find a more affectionate bird.

Remember, budgies are flock birds and will thrive when kept in small groups. The birds are also known to converse among themselves. While the male bird is more active and playful and can co-exist peacefully with one another, the female is often more aggressive with other females, especially if you limit them to small confinement.

They love to swing, hop and perch and playfully bob their heads. Needless to say, they will demand plenty of room for these activities. You will also want to note that the species love to chew on anything that comes their way. The chewing is a way of keeping trim of their ever-growing bills and talons. The best part, their tiny beaks can pinch mildly without causing any serious damage. Therefore, you can rest assured that your kids will be safe with the birds around.

It’s no surprise to see them grinding their beak as they sleep, or stretching and yawning, and preening and fluffing up their feathers. Also, budgies taking a midday nap of about 30 minutes should be no news. 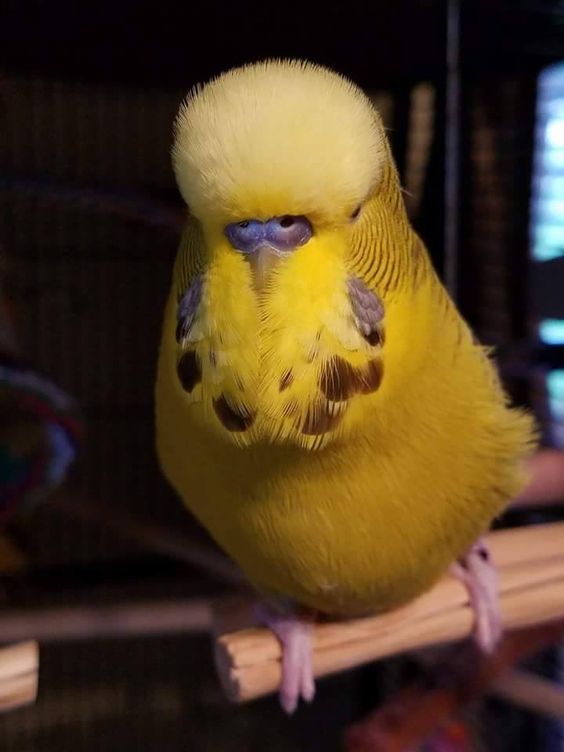 English Budgie standing on a branch

As aforementioned, the English budgie is an upscale variant of the indigenous wild Australian budgie. Although they were first noticed by British voyagers and explorers in the mid-1700, it was not until 1840 that they were brought into England. In its native land, the bird wasn’t as common then as it is in the present day.

Back in England, selective breeding worked its magic to alter the genetic makeup of the smaller Australian budgie. The deliberate years of study and breeding effort paid a dividend and in the long run, a new breed emerged in the name of the English budgie. By the time Australia was banning the exportation of native budges in 1894 due to depletion of stocks, breeders in Europe and North America were producing new species in thousands. So popular was the companion parrot that in 1845, Queen Victoria was gifted a pair of budgies.

Afterward, the financial appeal of show budgies inspired the breeders to train the birds for pet shows and exhibitions since other restless birds were unsuitable. By the mid-20th century, keeping budgies was all the rage. All that said, this species has never existed in the wild.

English budgies have a taste for seeds and whole grain, fruits and green vegetables, pasta, insects, and commercial pellets. Talking about commercial feeds, ensure you supplement the diet with calcium cuttlebone to keep the birds’ beaks healthy and strong.

You can never get enough of the delightful songs and beautiful chirping voices you will hear from budgies.

Besides, English budgerigars are prolific talkers. With persistent routine training, they can master human speech and learn an impressive amount of words and sentences through mimicking. It is however difficult to notice the quality since their voice is usually low. More entertaining than that is that the agile bird will pull stunts and perform tricks.

It is worth noting that the pet birds that are kept alone have greater chances of being apt speakers. Keeping these budgies in groups will likely revert them to getting used to budgie language.

English budgies have one common cause of diseases; yeast infections. Once you notice the bird losing weight, vomiting, giving out loose droppings, or seeming lethargic, do not hesitate to call a vet. Other diseases that may attack your lovely feathered friend include parrot fever, sour crop, and gastrointestinal disease.

Budgie owners can contain these health issues by regularly cleaning the cage and perches to prevent transmission. Keep a shallow container of water within easy reach of the bird. While a good number of budgies will opt for cleaning themselves, using a spray bottle, you will have to bathe the others that may be unwilling to voluntarily hop into the water.

Despite all the popularity and hype, English budgerigars have a shorter lifespan than their standard budgies. This can be attributed to the inbreeding involved in coming up with the subspecies. The average life span of the former is around 6-12 years. 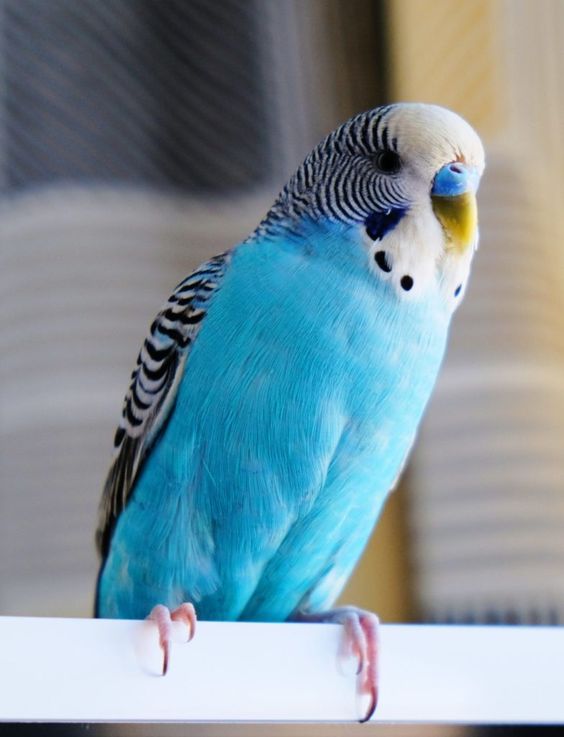 budgie standing on its cage

Compared to ordinary budgies, the English variant is costlier. If you’re serious about taking the bird home with you, you will need to shell out about $60 to $90 depending on the color mutation of the pet birds, and whether you are buying from pet stores or breeder.

Keep in mind that the birds’ beaks and nails are continuously growing. Therefore, the budgie will need a supply of interesting toys to keep the nails and beaks trim. The bird’s confinement should also feature perches, swings, and sufficient real estate to allow the budgie to exercise and burn off the oozing energy calories. Remember to constantly change the toys and prevent the bird from getting bored of them.

If you are the kind of person who loves downbeat and laid-back pets, the English budgie has just the calm you need. And like most variants of parrots and parakeets, the English version is pretty sociable and active making them decent and lovable pets.  The good news, the budgie will thrive both as a single budgie or in a group. If you intend to keep a single bird, you will need to provide company since it is likely to get lonely.

That’s not all. The colorful plumage is also in line with the marvel that it is. The pet bird is graced with colorful feathers that will add a pop of color and elevate the décor of the space. 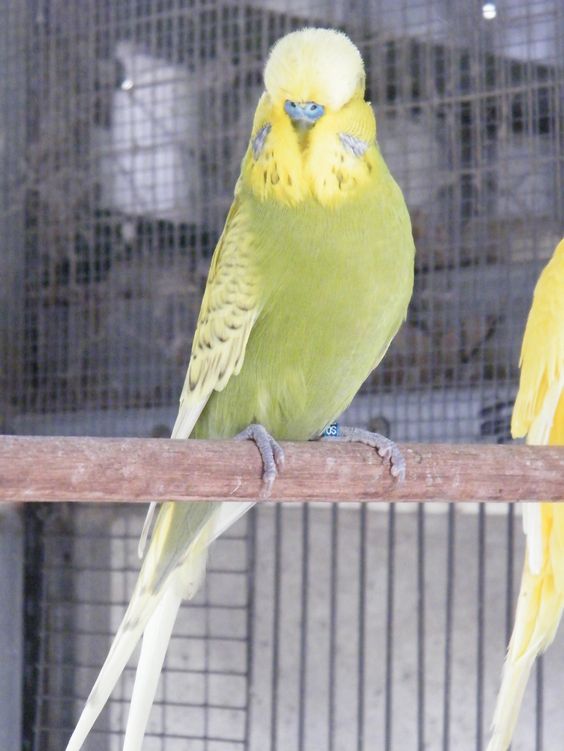 How big can an English Budgie get?

Did we mention that the English variation is the largest of the budgie world? It can grow to a head-to-tail length of 10 inches long and weigh about 50 – 70 grams, about twice as much weight as the wild budgie.

A word to the wise: Let not the fluffy-feathered appearance deceive you into thinking the bird overweight

What is the difference between English and American budgies?

Below are the noticeable attributes that set the English budgie apart from the American variant;

How many different types of budgies are there?

Besides English and American budgies, there is a wide variety of budgies including but not limited to opaline budgies, crested budgie, spangle budgies, yellowface, and golden face budgies, and clear body budgies.

How do you tell the gender of the English budgie?

The male cere (the area around the nose and nostril) is usually bright blue while the females is brown, pink, white, or tan. During the breeding season, the males’ cere turns to a darker shade of blue while the hen’s cere enlarges and becomes scaly. Moreover, males are usually more active than females.

How much does a budgie weigh?

How to train an English budgie?

English budgies can learn upwards of a thousand words and sentences through mimicking. However, the voice is usually low making it difficult to notice the quality.

How do you breed English budgies?

Budgies begin breeding between the age of 1 – 6 years. The breeding season usually starts when the weather becomes cooler, usually beginning October and running to April.

You need to find a healthy and compatible breeding pair and separate them from the flock. Ensure they are not from the same family. Consider getting a pair that is already familiar with each other for easier breeding.

Inside the birdcage, put a nest box at the back or sides. Ensure the nest box is sizable enough to accommodate the birds. Ensure you provide enough food and water during the breeding period.

The mother budgie will incubate for 18 days before hatching.