What is the King Rail bird? 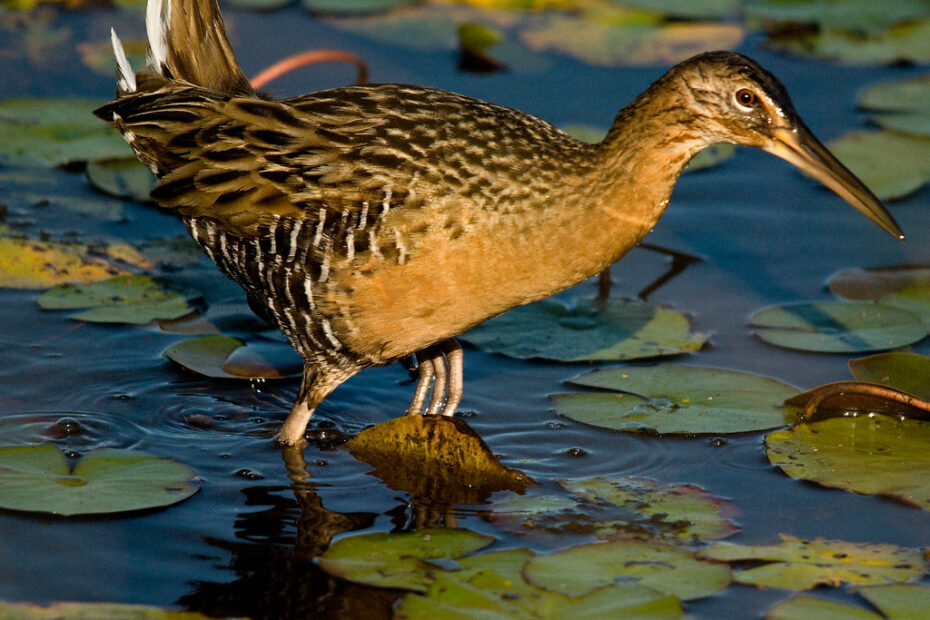 Watching birds in their natural habitats is an excellent way of getting closer to, connecting with and appreciating nature. You also get to break away from your routine work life, clear your brain and get a breath of fresh air.

One bird well worth looking out for is the king rail. A bright and active chicken-sized water bird native to the marshes of North America. But before you set out to explore away from civilization and observe this beautiful speckled avian, having profound knowledge of the bird will help you make informed arrangements and deductions. So, here is an in-depth round-up we put together to give you a clear insight of the king rail bird.

What is a king rail?

The king rail (Rallus elegans) is a medium-sized marsh bird native to North America. It is the largest among the secretive rail bird family in the continent, and can be observed from a large range from the Mid the United States, stretching South to Central America and the Caribbean. They breed in Canada around Ontario.

They are more common in shallow and open freshwater marshes although they will occasionally forage in shallow brackish marshes as well (saltwater marshes). They prefer weedy and low-salinity wetlands with grasses, cattails, rushes, sedges and or other reeds which they hide in the marsh vegetation during the nesting period. Also, you can spot this bird in rice fields.

It is very much alike to its cousin the Clapper Rail, although the king rails plumage is entirely brighter.

Small fish, crustaceans like crabs, crayfish and clams, snails, frogs, spiders, insects like grasshoppers, and other aquatic animals are the main diet of the king rail. The birds are omnivorous and will occasionally bite on leaves and seeds of weeds and aquatic plants.

Courtesy of the long, pointed and slightly curved bill, the bird can strike and fish out their prey from the muddy are weedy marshes. 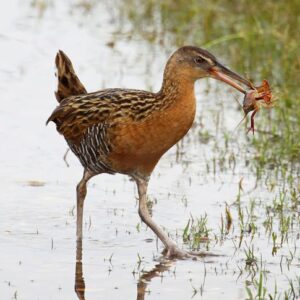 The water bird is pretty noisy. It will repeatedly let out a loud rasping “kek kek kek” clatter. The sound is almost the same as that of the Clapper rail although the Kings’ call is slower and deeper. During the breeding season, you will hear a series loud screeching grunts. One grunting rail will usually set off the rest.

Diseases that are specific to this species are yet to be established although some like the West Nile virus are known to infect other closely related birds such as Clapper and Virginia rails.

The undercoat if the king rails plumage is orange-brown with contrasting black and white speckled patterns on the sides the wings and sides of the body. The neck, face and upperparts are rich orange with distinct dark streaks. The male’s plumage is usually brighter than the female’s. 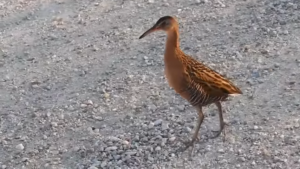 The king rail forages in shallow open water with dense marsh cover, or along a marsh edge. You will find the bird stalking the prey slowly and quietly, and will quickly take a jab with its long sharp bill. For bigger prey, this species prefers carrying it to hard ground and dismembering the creature before swallowing the pieces.

Even more, during the breeding season the male will move around with their tail raised to flaunt their undertail coverts. They will nest in clumps of the marsh plants. The bird weaves a canopy over the top of the clump to cover the eggs or babies and protect them from possible predators. After producing eggs, the adult bird will shed its feathers and will be unable to fly for a couple of weeks. 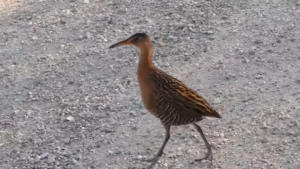 Many places in its habitat range map have seen a decline or disappearance of populations of the king rail bird over the years due to the following;

The breeding and nesting season begins in April and ends in July. The birds breed once every year .

The female will lay about 8 – 12 pale buffed eggs with brown spots. Both sexes incubate in turns for a period of 21 days with the male defending the nest. Shortly after hatching, the babies are capable of leaving the nest and following the adults. After about a month, the juveniles will begin to forage and feed themselves. 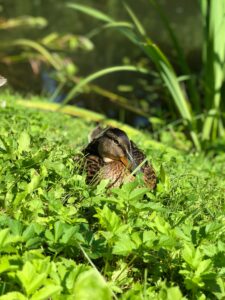 The king rails a chicken-sized bird with a small head, long, pointed and slightly curved beak, fairly long neck, short tail, and long robust legs. It has an orange-brown with contrasting black and white speckled patterns on the sides of the wings and sides of the body. The neck, face, and upper parts are rich orange with distinct dark streaks. The male’s plumage is usually brighter than the female’s.

Why is the king rail endangered?

The kingbird is endangered due to the loss of its marshy natural habitat, run-off farm chemicals that affect the population of the prey, and legalized hunting in some states in the US.

Where is the king rail native to?

It is native to North America ranging from the United States and Canada to Central America and the Caribbean.